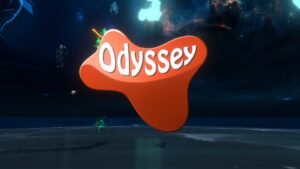 Odyssey has been branching out over the last couple of years and exploring the newest VR worlds. Our current concentration is on the virtual world of NEOS VR. We have multiple sims running in NEOS, both as studio and exhibition spaces. Our latest project is supporting the development and presentation of the new installation, Meta Creation in NEOS VR, by Liz Solo and Dr. Jeremy Turner of the BBMC.

The artists have been experimenting and building in NEOS for many months, developing autonomous NPC (Non-Player Characters). These NPCs use machine learning and Artificial Intelligence to become creators of original musical compositions. Their songs change based on input from the users. The NPCs will live independently in NEOS,  where anyone may visit and interact with these virtual beings.

The artists are still busy coding and testing their creations but a premiere exhibition is in the works. Details will be announced soon. Here are screenshots of the artists working in NEOS. Dr. Turner is working on an NPC that creates requiems in response to the input of the user. The NPC’s colour, shape and position, all change based on the movement and other inputs of users in the space. Liz Solo’s NPC is the ghost of a whale that will sing to users in an interactive underwater environment. Screenshots by Liz Solo.