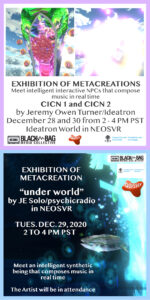 The Odyssey sims in NEOS VR are proud to present the results of this year’s research and creation project – Meta-Creation in NEOS VR. Exhibitions of the artist’s work are coming up this week!

Dr. Jeremy Turner will present his intelligent NPCs – named CICN 1 and CICN 2 – on December 28th and December 30th, from 2 – 4 PM PST, live from Odyssey in in NEOS VR and also via the BBMC’s Twitch Stream. Jeremy’s NPCs create original Requiems, after some of the world’s most famous composers. Join us in NEOS VR or watch out for our Twitch Channel.

JE Solo has built an underwater environment to house their creation – an NPC (Non-Player Character) Whale that plays AI generated audio as it interacts with users. JE’s exhibit opens on Odyssey in NEOS VR on December 29th, from 2 – 4 PST and the event will be streamed live to the BBMC’s Twitch Channel. You can also search “under world” in NEOS to visit the installation and meet the whale-being anytime.

Meta Creation in NEOS VR is the latest project from the BBMC, led by the artists JE (Liz) Solo and Dr. Jeremy Turner. JE and Jeremy are  experimenting with the capabilities of NPCs (Non-Player Characters) in the social VR world of NEOS. The artists are creating NPCs that have the ability to create in their own right – essentially becoming autonomous virtual artists.