(Reposted from The BBMC’s blog) The BBMC has been exploring multiple VR environments over the last four months as a part of our Canada Council for the Arts funded Odyssey VR Project. Collective members are looking for VR platforms that will support workflows for creative projects and that will offer realistic possibilities for presentation in performance, performance art, installation and machinima.

Since 2002 BBMC members have been working in online VR platforms like Second Life as well as intervening and performing in MMORPGs like World of Warcraft and Achaea. We continue to run the Internationally renowned Odyssey Contemporary Art and Performance Simulator in Second Life (operating since 2005) and are looking to expand Odyssey by creating a home base in one or more new VR worlds.

Over the last months Jeremy Turner has been our consultant and intrepid guide as we’ve explore VR Chat, AltSpace VR, High Fidelity, Sansar, and even Facebook Spaces. The BBMC studio has acquired two Oculus Touch headsets

and as well as exploring VR we have hosted multiple Open Studio sessions to introduce interested colleagues to the technology. What we have seen so far has been nothing short of amazing – from a fabulous guided tour of Nefertari’s Tomb in High Fidelity to visits to hyper real environments and artist studios in VR Chat, and live performances in AltSpace VR, the level of embodiment and immersion is very impressive.

BBMC members are mostly working in performance and new media. We are not developers but content creators and so before we set up our new VR Studio we’ve been looking for a set of very specific features:

Community – as performers we are, by nature, collaborative. One of the main resources we need is access to other creative people. Also, of equal importance, as performers we need access to audiences. While many of the new VR spaces are quite populated, like VR Chat, it is difficult to locate community. In our experience, many of the spaces are confusing, avatars running madly around with no intention or destination.

While it is nice to have town halls and developer meetings — as they do regularly in High Fidelity and AltSpace VR — what we really need is a community that does not need to be facilitated or policed, that is based on sharing and that is inherently open and welcoming. The best case scenario would be a VR platform that we can enter and start working in immediately.

Accessible Building Tools — Coming from worlds like Second Life, which, although there can be a high learning curve, are fully customizable, we are looking for at least a semblance of that accessibility when it comes to creative tools. That would mean access to tools that give us the ability to create our own worlds, build our own objects, customize our own avatars. Ideally this would not be excessively complicated or require the use of external programs (like Unity).

If the world does not offer accessible building tools then it is of little interest to us. Despite the fact that some of these spaces are quite lovely, our needs lessen the appeal of places like Sansar and VR Chat because building in these VR spaces is such an intense process. The lack of accessible building tools can be frustrating, as users don’t have ways to engage and the experience, once you get over how fantastical it all looks, is boring.

Machinima Making Tools — Machinima plays a critical role in the work of the BBMC and its members, Firstly as a means of documenting our work in VR and for many of us machinima has been incorporated into our individual practices. The VR world(s) that we are looking for would offer realistic tools in the practice of machinima.

Safety/Safe Space — The BBMC has no time to be working in any space that is not safe or where members are hindered in exploring their creative impulses freely. We have no tolerance for hostility or abuse in our VR experiences.

So, building in most of these aforementioned VR worlds requires the use of external 3D modelling programs, or there are barriers to accessing independent space and communities or we did not resonate with the culture that we encountered.

Last week our fearless leader suggested we enter a VR world he had visited months ago when it was still in early development. The moment we entered NEOS VR we were immediately creating our own spaces, making our own content, playing with machinima and other tools and meeting with creatives. We have never seen such intuitive interactivity and the level of access to creative tools… well, they’ve hit it out of the park.

It’s still early days for us and for NEOS VR but after just one week the BBMC would like to say congratulations and thank you to the developers of this new platform because it is just what we have been looking for. The level of accessibility is very inspiring. The BBMC are excited to now be working on setting up our new Odyssey VR Studio in NEOS VR.

Jeremy Owen Turner is a new media artist, curator, and adjunct professor in Cognitive Science at Simon Fraser University. He co-founded Second Front, a pioneering avatar performance art group. Turner has been exploring the real-time creative capabilities of online environments since 1996 and virtual worlds since 2001.

All members of Odyssey and interested parties are invited to join us as we continue exploring and as we start new projects in VR spaces. Email us anytime to arrange a conversation: blackbagmediacollective@gmail.com 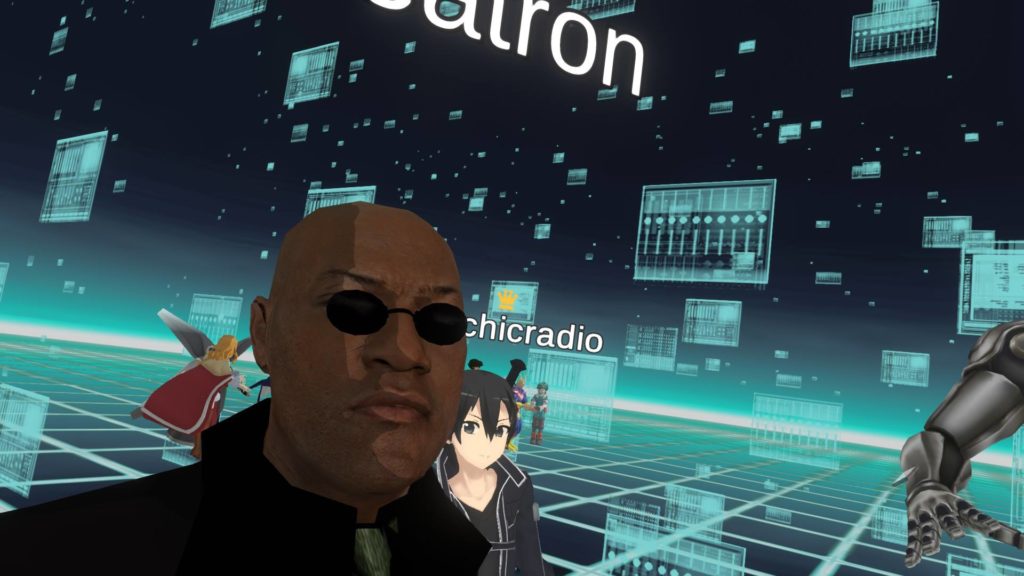